Tastebuds not neglected in Pukeiti revamp

Visitors to Pukeiti wanting a light meal or a snack have a treat in store this season.

The Founders Café season has been extended and the cafe will remain open until the end of May, with a cosy new autumn menu.

A new-look Founders Café opened early in September 2017, allowing patrons an early look at the Rainforest Centre that officially opened later in September.

Colourful modern décor is a feature of the new eatery, which seats 60 inside and another 40 in a covered area directly in front, with panoramic views of the world-renowned garden and down to the coast.

The menu features light meals and a selection of snacks, sweets and refreshments. The café is licensed.

The Founders Café is  open from 10am to 4pm Wednesday to Sunday from 1 September to 31 May, and all public holidays except Christmas Day. 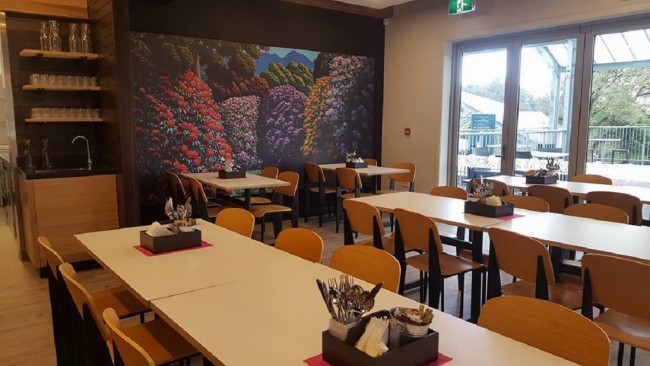 Fouinders Café at Pukeiti seats 60 inside and 40 in an adjacent covered area.

Colourful decor is a feature of the new-look Founders Café at Pukeiti.