Taranaki aims to be the first predator-free region in the country under the project, Taranaki Taku Tūranga - Our Place, Towards a Predator-Free Taranaki, led by the Taranaki Regional Council.

It is understood to be the largest predator-free project of its kind in the world, removing predators and preventing re-infestations from rural, urban and conservation land.

It is the first large-scale project to receive funding from Predator Free 2050 Ltd, the company set up by the Government in 2016 to help New Zealand achieve its predator-fee 2050 goal. The $11.7 million of funding support over five years was announced today by Conservation Minister, Hon Eugenie Sage.

Towards a Predator-Free Taranaki will cost $47 million in the first five years with the ultimate aim of removing stoats, rats, and possums from all land types across the region – farmland, urban land, public parks, reserves and Mt Taranaki - by 2050. The project is using the latest technology and trapping techniques, with lessons shared, helping New Zealand achieve its predator-free aspiration.

Council Chairman David MacLeod says strong community support will be vital to succeed and he’s confident Taranaki people will get behind it.

“This is a massive opportunity for the region and for New Zealand. The support from Predator Free 2050 Ltd enables our region to protect and enhance native wildlife and plants, building on existing predator-control work, “he says. 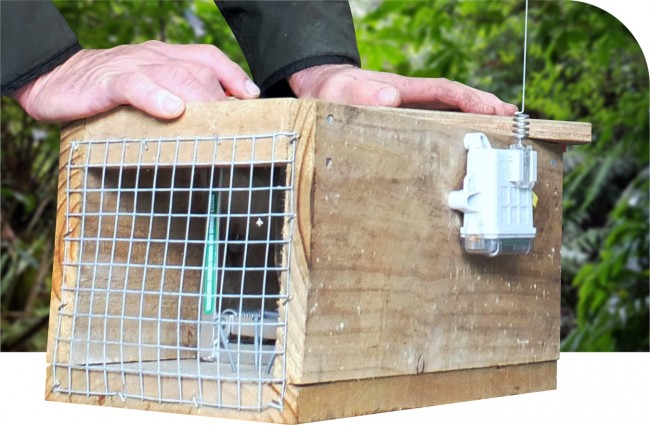 Remote sensors, wireless nodes and a trapping app will be among IOT (Internet of Things) technology used to remove predators and prevent re-infestations. The high-tech equipment makes trapping more efficient, particularly in rural areas, and provides live trapping data – sending a smartphone alert to the user when a trap goes off. Data will also be collated about how, where and when predators are caught, helping the Council identify clusters and tweak the trapping network.

A virtual barrier, made up of natural barriers, traps and remote sensors, will prevent re-infestations and will be moved across the region as predators are removed from each area. The region will be divided into pizza-slice sections and different phases of work will be rolled out around the mountain, starting in the New Plymouth area, Oakura and the Kaitake Range.

“Taranaki has unique advantages that can make it the first region in the country to remove introduced predators – its relatively compact geography, its regional and national expertise in biodiversity and predator control, and strong community collaboration and enthusiasm at all levels,” Mr MacLeod says.

The project will link with successful predator work in Egmont National Park by Taranaki Mounga Project, which has already reduced predators to low levels and allowed the reintroduction of several species including the North Island robin (toutouwai) and blue duck (whio).

The project will also build on existing work in urban and rural areas, including the Council’s voluntary urban possum control programme in New Plymouth, and its rural Self-Help Possum Programme, one of the biggest programmes of its kind in the country which is keeping possum numbers at low levels.

Predator Free 2050 Ltd Chief Executive Ed Chignell is excited about the opportunities to advance the rest of the country’s predator work using lessons learnt from Towards a Predator-Free Taranaki.

“I’m thrilled to support Towards a Predator-Free Taranaki. This exciting project is uniting a community against predators, using traditional and new methods to remove possums, rats and stoats from the region. A project of this size and covering all land types has never been attempted before and the lessons learnt will be shared with the country, advancing New Zealand’s predator-free 2050 goal,” Mr Chignell says.

“The Taranaki Regional Council is a leader in biosecurity and biodiversity and I’m convinced the people behind this project have the experience and expertise to succeed and contribute to New Zealand’s predator-free aspirations.”

Towards a Predator-Free Taranaki will rely on collaboration between TRC, the region’s three district councils, residents, Taranaki Mounga Project and the region’s biodiversity coalition, Wild for Taranaki.

“This project is taking Taranaki forward and its success is in the hands of the people of the region. We’ll be reaching out to schools, community groups, farmers and residents in different areas in the coming months as we enter new phases of the project,” Mr MacLeod says.