Golf club gets into the swing of trapping

There have been plenty of birdies at Westown Golf Club lately - but it's got nothing to do with the golf scores.

There have been plenty of birdies at Westown Golf Club lately - but it's got nothing to do with the golf scores.

Instead, it's the result of an ongoing effort by club staff and members to rid the scenic course of rats and stoats and restore the area’s native biodiversity.

Course superintendent Steve Hodson reckons he has the best office in the world.  It’s hard to argue – with unobstructed views of Taranaki Maunga, the Te Henui Stream running alongside and plenty of bush, it’s definitely a spot worth protecting.

The club has been trapping possums for years as part of the Taranaki Regional Council’s Self-Help Possum Programme, catching just a couple in that time.

Then in July 2019 they started targeting rats and stoats, putting out 10 traps initially, which has now grown to 20. They’ve caught 163 rats (five this week alone!) and seven stoats.

Six months ago trapping stepped up a gear with the establishment of a five-man trapping roster.  Responding to a call in the club’s newsletter, the five members put their hands up to check the traps weekly. 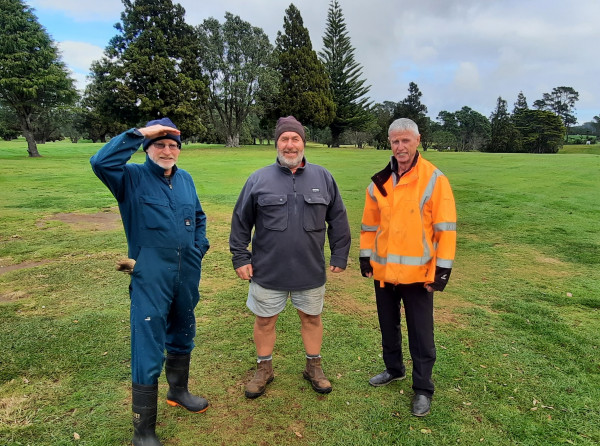 With traps being checked more often, catches have doubled, with weekly tallies noted down on a piece of paper that’s handed to greenkeeper Tyler – as the youngest in the shed it’s his job to enter the results into Trap.NZ!

Volunteers John Sutton and Ross Wharfe agree they’ve noticed an increase in birdlife around the course, including tūī, kōtare (kingfisher) and even more ducklings surviving in the course’s ponds.

It’s also sparked interest among other members, some of whom have donated traps if they couldn’t physically help out.

“So we must be doing something right,” says Steve.

A past president of the New Zealand Golf Course Superintendents Association, Steve is a strong supporter of the Towards Predator-Free Taranaki vision and encourages other golf clubs to get involved as well, if they haven’t already.

In the meantime, Steve and his team of volunteers plan to keep improving their beloved course through trapping.

“I love it. We’re making it a better place.”

The other volunteers are Alan Kindler, Graham Miles and Bernie Lile.