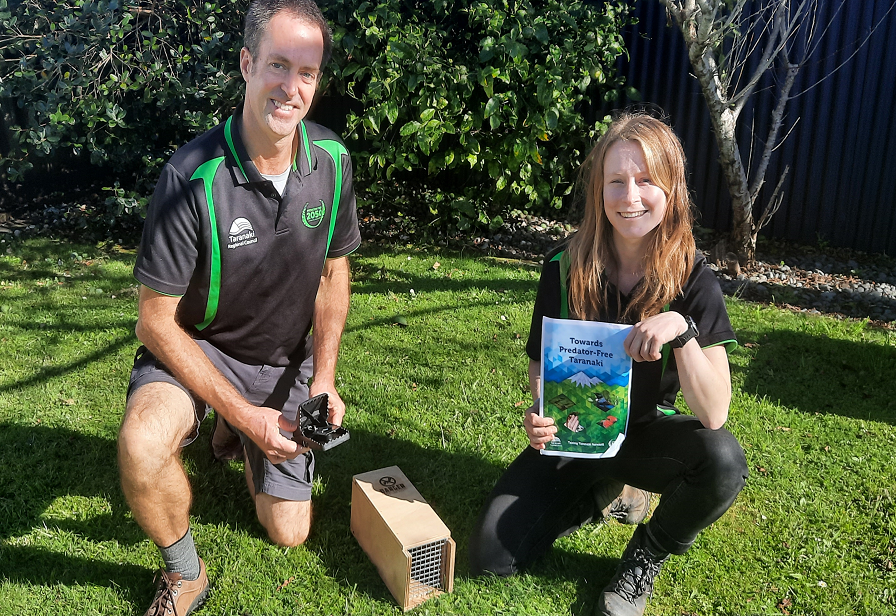 The funding for 12 months has been awarded to the Taranaki Regional Council-led project by Crown-owned Predator Free 2050 Limited, through the Jobs for Nature (Mahi mō te Taiao) programme.

Council Environment Services Manager Steve Ellis says the six full time equivalents – a mix of employed staff and contractors - will provide a timely boost to the project, which has been running since 2018.

“We believe they will make a real and immediate difference to the outcomes we are achieving and in doing so, accelerate progress towards our end goal,” Mr Ellis says.

“And of course it’s been great to offer locals such exciting employment opportunities.”

The new team members are already making an impact across Towards Predator-Free Taranaki’s three projects.

The rural project targets mustelids (stoats, ferrets and weasels). It is being rolled out around the region in phases, with Council contractors installing traps and reducing mustelid numbers before handing responsibility over to landowners.

A new officer will support landowners through that transition and beyond, including helping them efficiently incorporate predator control into their farm work and use the associated technology.

In the urban space two part-time community liaison officers are now out and about in New Plymouth. More than 6,000 rat traps have already been set in the city’s backyards, in addition to those in parks, reserves and walkways.

“When we launched heaps of people went out and bought one of our $10 rat trap packs, which was awesome. But over time it’s inevitable people forget about it or lose the motivation to check traps, keep them baited and record results on trap.nz,” Mr Ellis says.

“So that’s a big part of the new community liaisons’ role – reigniting enthusiasm among those who have traps, as well as getting more people on board.”

The ‘zero possum’ project, a joint initiative with Taranaki Mounga Project (TMP), set out to eradicate possums from a 4,500 hectare area including 2,300 hectares of the Kaitake Range, 2,000 hectares of Kaitake farmland and Oākura town.

Mr Ellis says eradication is within reach and the new resources allocated to the project will speed up progress.

A new technician is now based at Pukeiti, the site of a remotely monitored 1300 trap barrier, while a new contractor is focusing on the farmland. Funding for another two staff has been passed to TMP for its work within Te Papakura o Taranaki (the national park).

Mr Ellis says while it’s great to have more team members on board, Towards Predator-Free Taranaki is a community effort and the more people that do their bit, the better the results will be.

“We have had fantastic support over the last three years from volunteers, farmers, schools, community groups and residents. Let’s keep that up.”

There were previously five Council staff employed on the Towards Predator-Free Project, supported by 25 contractors, hundreds of volunteers checking traps across public reserves and thousands of people checking traps on their own properties.

Note: The new funding will cover new staff and contractor wages, as well as the cost of associated equipment, vehicles and resources.