The cacophony of noise emanating from Simon Howard’s lush backyard is unbelievable. If you closed your eyes, you’d think you were in the middle of a pest-free sanctuary, not a five minute drive from New Plymouth’s CBD.

The cacophony of noise emanating from Simon Howard’s lush backyard is unbelievable. If you closed your eyes, you’d think you were in the middle of a pest-free sanctuary, not a five minute drive from New Plymouth’s CBD. 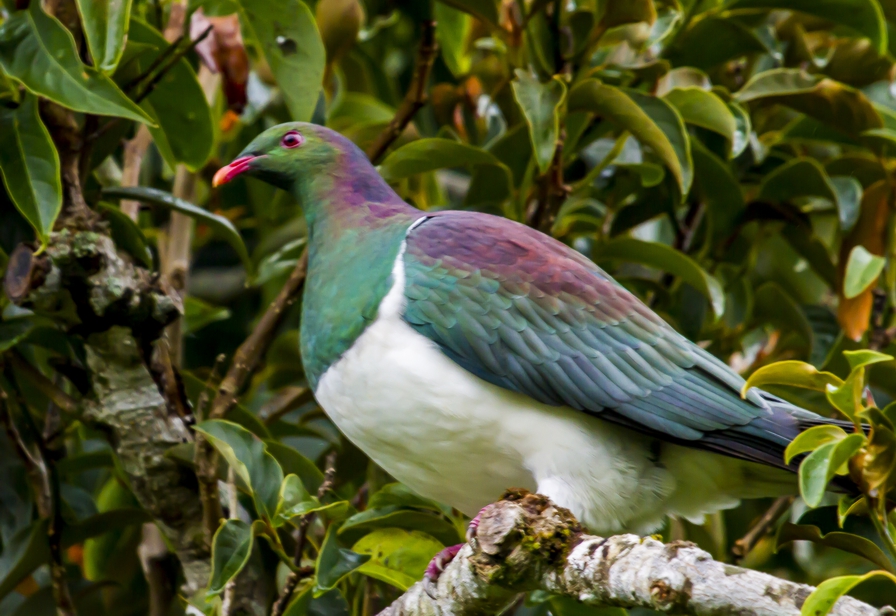 The tūī flit loudly, dive bombing each other as they fight over their turn of the sugar-water stands. Tauhou (silvereyes/wax-eyes) weave and bob on the trellis overhead, drawn in by their smaller bowl.

‘’The wax-eyes come in first thing and drink up until the sugar water level is too low for them to reach, then tūī dive in and drink up the remaining water,’’ Simon says.

‘’We’re on to our fourth generation of tūī now.”

It’s a haven for these feisty honeyeaters, but they’re not the only birds visiting this urban oasis in Upper Vogeltown. Simon has regular kererū pairs, riroriro (grey warbler) and ruru (morepork) and has even had visits by kārearea (NZ falcon) and korimako (bellbirds).

Simon has an obvious love of birds and the natural world. He can tell you about individual tūī because some are “strange drinkers”. He valiantly tries to video the fast-moving birds and tops up the many bird feeders daily, which involves bulk production of sugar water.

When he talks about his backyard, he describes its ecological ebb and flow with an almost Thoreau Walden quality; you can tell he has diligently and lovingly watched and learned from his backyard through the changing of seasons.

This biodiversity paradise didn’t happen overnight and despite the obvious successes, there’s still a way to go.

‘’The birds come here during the day to feed, but they don’t all stay at night yet. It’s not safe for all of them,’’ Simon says.

Simon has up to five rat traps and a couple of possum traps. He attributes his success to the holistic approach of bush regeneration in conjunction with predator control.

He planned out the restoration of his backyard gully by using a holistic approach to combat invasive weeds and predators. He used the Gully Restoration Guide(external link), a guide book produced by Hamilton City Council, planned out the stages of plantings and removed stubborn invasive plants by hand.

There’s a solid chunk of bush around Kereru Place, so get in contact if you live around the area and want to trap your backyard – Simon would love your help to protect these local birds.