A first look at Yarrow Stadium’s new East Stand has been revealed with the release of an artist’s impression of the design. 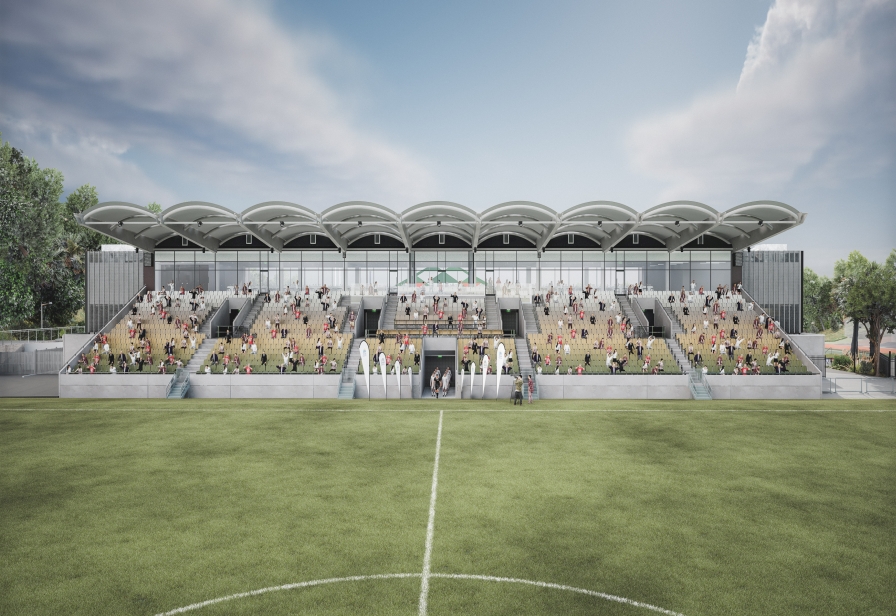 An artist's impression of the new East Stand.

David MacLeod, Chairman at Taranaki Regional Council which owns the venue through the Taranaki Stadium Trust, says finalising the East Stand’s design marked a major milestone in the project.

“We think the East Stand’s design is absolutely fantastic and we hope our community will be thrilled when they see the artist’s impression and the details about the facilities on offer. We’re delighted to have been collaborating with Ngāti Te Whiti and their mahi is helping to make the stand a special place and unique to our region.”

The unveiling of the design comes as the overall budget for the project has been updated following cost increases and supply chain issues related to the COVID-19 pandemic and geopolitical turmoil. Scope changes have also had an impact on the budget, said Mr MacLeod who noted that original costings were based on the repair of the TSB Stand, which had to be demolished because repair was uneconomic.

Mr MacLeod said while work was continuing on the East Stand’s design and costing, the total funding envelope for all Stadium works was expected to rise from $50m to a target of $70m.

“It’s extremely disappointing we’ve had to adjust the budget. Like many construction projects across the country, we’re facing major supply chain issues and materials are more expensive and that means the overall budget will be more than we had anticipated.

“When the original budget was set, we couldn’t have predicted the world we’re living in today with Covid-19 and the Ukraine-Russia war. We know that our community is also feeling the pain of rising prices so we’ve worked hard to mimimise the impact on Taranaki ratepayers and the Yarrow Stadium targeted rate is not changing.

“We’ve secured an extra funding of $10m from the Government which has limited the impact on ratepayers, and we have to once again thank the Government for stepping up. The funding arrangement is a fantastic outcome for our region and more than we could have hoped for.”

Mr MacLeod highlighted the strong partnership with Ngāti Te Whiti who have contributed to the cultural design of the new building.

“The stand provides much, much more than the old TSB Stand and has more flexibility with visitors able to use it for both the main pitch and the outer fields and there is more space for events such as conferences and trade exhibitions.”

He said the West Stand remained on track to be reopened in September and will be delivered on budget despite the challenging construction conditions.

“That’s a remarkable achievement given the last two years where we’ve all been impacted by the pandemic and there has been additional costs such as having to replace the roof on the West Stand.”

As well as the replacement of the now demolished East Stand and refurbishment of the West Stand, after both stands were found to be earthquake-prone, the redevelopment includes installing a more resilient main pitch and replacing the old lights with new brighter, eco-friendly LED lights.

The project has received funding from the Government’s Covid Infrastructure Recovery fund. The West Stand will reopen on 3 September this year and the new East Stand is forecast to open in 2024.