The project to upgrade and restore Yarrow Stadium’s West Stand is raising the roof! 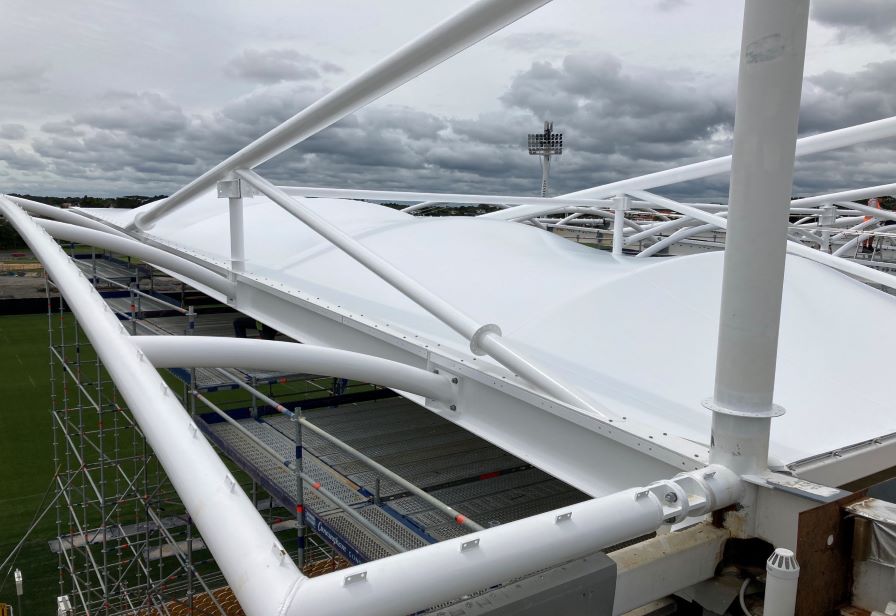 The West Stand is being future-proofed with the replacement of the old roof with a new fabric roof.

Work started this week on installing the new fabric roof with the mahi expected to be completed before Christmas, weather permitting.

Taranaki Regional Council Chair Charlotte Littlewood said it was great to see the work now under way. ”New Plymouth is the sunshine capital of Aotearoa but we had a pretty wet and wild winter which put the brakes on getting the roof on earlier in the year. We’re now hoping for some fine days with little to no wind so the crew can get on with the job,” says Mrs Littlewood.

“We’re future-proofing the West Stand by replacing the old roof. Finishing this part of the project will be another milestone on the road to delivering the best regional stadium in the country.”

About 2,250m2 of high-spec Serge Ferrari PVC is being used on the West Stand by contractor Fabric Structures Ltd. This is the same material used on the Hagley Cricket Pavilion in Christchurch.

This year has seen a number of important steps to finishing the project by the Council, which owns the venue through the Taranaki Stadium Trust, including work starting on the new East Stand, the installation of a new main hybrid turf pitch and the return of fans to watch the Bulls in September.

The project to replace the East Stand and refurbish the West Stand, after both stands were found to be earthquake-prone, has received $30m in funding from the Government’s Infrastructure Reference Group (IRG) programme. The East Stand is forecast to reopen in late 2024 to early 2025.