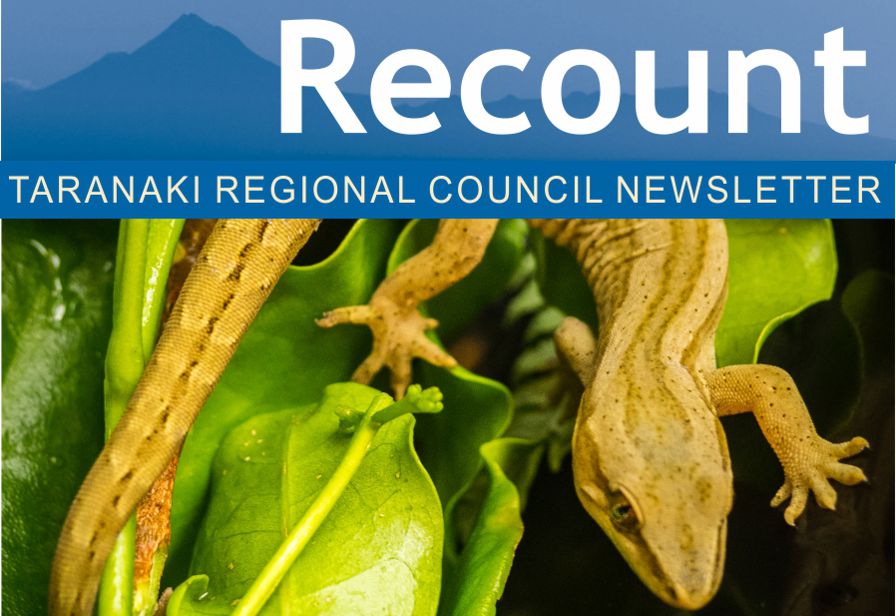 The Taranaki Regional Council has adopted a ‘no surprises’ Annual Plan for the 2016/2017 financial year, confirming the direction set in the 2015/2025 Long-Term Plan adopted last year. “The Council has a busy work programme planned for the coming year and, as outlined in the Long-Term Plan, there will be an increase of 1% in the general rates take,” says the Chairman, David MacLeod ... READ MORE

Local talent is to the fore in a new video promoting New Plymouth’s Citylink bus service, which is operated by Tranzit Coachlines under contract to the Taranaki Regional Council. Dinnie Moeahu and his crew from New Plymouth-based Dman Entertainment take viewers on a musical bus ride ... READ MORE

There’s never a dull moment, as they say, and the middle of the calendar year brings new beginnings for many in Taranaki. Like many other organisations, the Council kicks into a new financial year on 1 July ... READ MORE

Education programmes have been developed at all three of the Taranaki Regional Council's iconic heritage properties following the success of the first at Pukeiti. The Pukeiti Rainforest School was established three yars ago and this year it has been complemented by the Tupare Riverside School and the Hollard Gardens Woodlands School ... READ MORE

Key ecological treasures such as bush remnants and wetlands are being protected and enriched thanks to deepening partnerships between scores of individual landowners and the Taranaki Regional Council. The Council is working closely with the owners of 87 of the 172 privately owned sites identified as Key Native Ecosystems (KNEs) ... READ MORE

Walking on the wild side

Taranaki people have a new way to demonstrate their wild enthusiasm for the region’s natural environment. ‘Wild for Taranaki’, launched earlier this year by Conservation Minister Maggie Barry, provides a direct link between the community and important environmental projects across the region ... READ MORE

The distinctive Chapman-Taylor house at Tūpare has new cedar roofing shingles, replacing the former pine shingles that were in poor condition. The house at the premier New Plymouth heritage property was covered with a tent-like structure in April while the new shingles were installed. The covering was removed in May to reveal the new roof ... READ MORE

Swimmable? What does it mean?

New Zealand’s freshwater bathing quality is described in terms of whether it’s ’wadeable’ or ‘swimmable’, but do people understand what that means? Comparisons against European standards show that Kiwi tests are more stringent. Sites that are classified ‘unacceptable for bathing’ here could potentially be classifiable as ‘excellent for bathing’ in Europe ... READ MORE

Monitoring of the health of the region’s waterways continues to produce encouraging results. Analysis of the Council’s monitoring for the 2014/2015 year includes some of the best results ever for both ecological health and measures of the physical and chemical pressures on rivers and streams ... READ MORE

A South Taranaki waterway whose story is 'typical of the region' has been highlighted on the Land Air Water Aotearoa (LAWA) website. The Waingongoro River was 'river of the month' for May, with a three-minute video discussing recent improvements ... READ MORE

A 16km 'surf reserve' is set to become part of a draft new Coastal Plan for Taranaki, after an oceanographer highlighted the unique way lahar fingers extend into the sea to make special surf conditions. Dr Peter McComb suggested the stretch of coast between Kaihihi Rd and Cape Egmont was a prime candidate for reserve status ... READ MORE