A weathered old red-eared slider turtle found on a Bell Block walkway last week is believed to have been on the run for at least a year, possibly a lot longer. 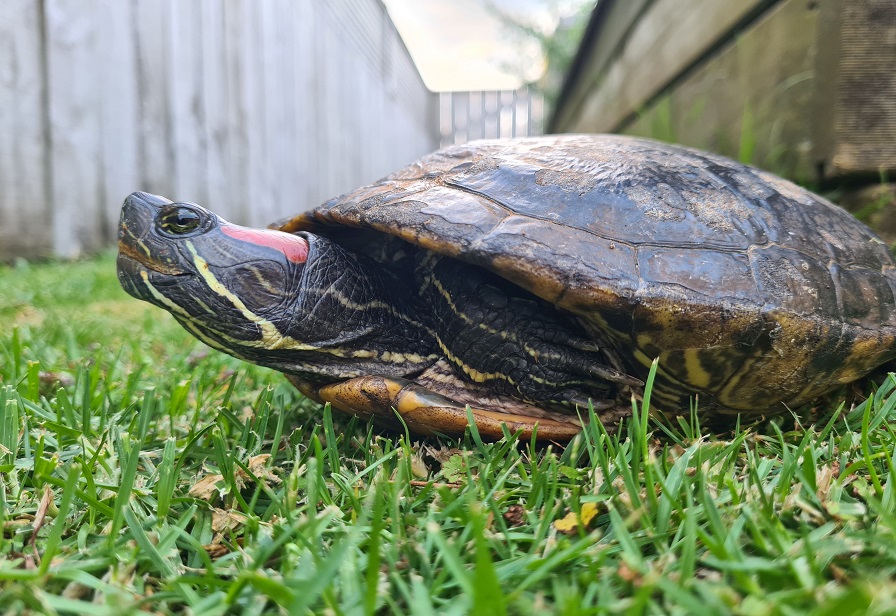 The 24cm or “dinner-plate sized” female was picked up by Taranaki Regional Council senior ecologist Halema Jamieson following a tip-off from a local.

Red-eared slider turtles are one of the world’s worst invasive pest species, with the potential to cause serious ecological damage if they become established in the wild.  They are of growing concern across New Zealand, with Auckland Council recently announcing pet stores will be banned from selling them as of September.

The problem is although they start off tiny and cute they grow quickly. Some unprepared owners appear to be dumping the turtles in the wild or allowing them to escape.

Ms Jamieson says the turtle found this week is likely the same one sighted last January in sand dunes just 500m from the walkway.

“She’s pretty scarred and looks like she may have been in the wars a bit over the last year, but the markings are the same.”

She suspects the turtle had been living in in the nearby wetlands.

Several red-eared slider turtles have been spotted around New Plymouth in recent years, including another on Dillon Drive in Bell Block a few months ago.

Ms Jamieson says if left to roam the female may well have encountered a male and bred, as has happened in other parts of the country.

“With temperatures rising in New Zealand we know this species is now able to successfully hatch eggs in the wild, which is a major concern.

“They can live for up to 50 years and produce around 400 offspring. They are omnivorous and eat everything, including eggs and chicks from birds’ nests, native reptiles and fish. They also carry disease.”

The turtle is now safe in an outdoor enclosure in Ms Jamieson’s backyard, while a suitable permanent home is found.  She’s a welcome neighbour for Kawe the eastern water dragon, who was captured on the Herekawe Stream – another abandoned pet that posed a biosecurity risk in the wild.

“A turtle is for life – can you commit to that? And if you do have one you can no longer care for, don’t just set it free. Return it to the pet shop or breeder or find someone who can take it on.”

The Regional Pest Management Plan for Taranaki sets out rules for the effective management of 20 species of pest plants and animals in the region.

“This could happen as a result of pets escaping as well as the threat of new species sneaking into the region on stock or goods. The Council works alongside our neighbouring councils and the Ministry for Primary Industries to identify and manage potential pathways as it’s crucial we remain on guard at all times.”