Charlotte Littlewood is the new chairperson of Taranaki Regional Council, after she was elected unopposed by fellow councillors. 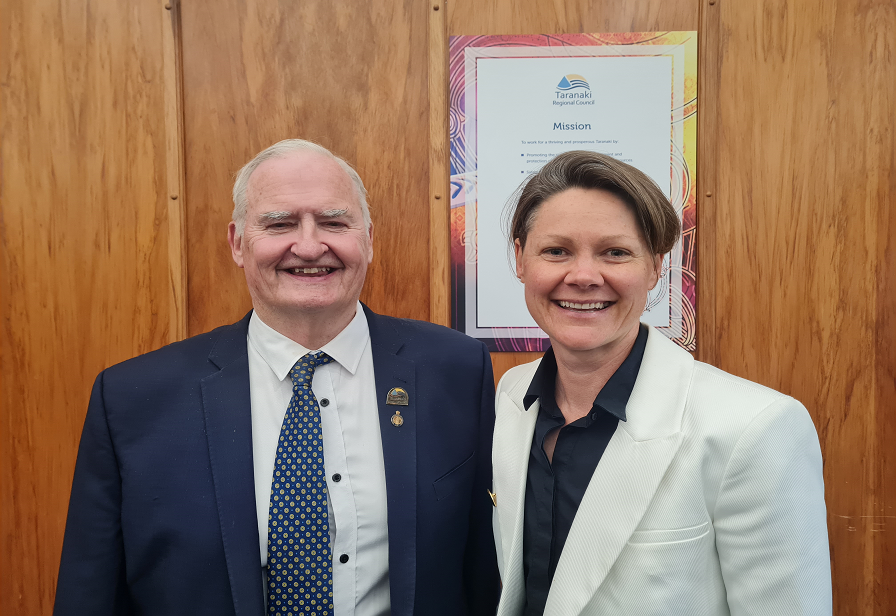 At today’s triennial meeting, Mrs Littlewood was the sole nomination for chairperson and received a round of applause as her appointment was confirmed.

She nominated long-serving South Taranaki Constituency councillor Neil Walker as her deputy, which also passed with no opposition.

Mrs Littlewood, in her third term representing the New Plymouth Constituency, thanked her fellow councillors for their support and pledged to lead diligently, respectfully and with integrity.

“I am truly humbled and this is something I don’t take lightly.”

She said the Council had a key opportunity to become one of the best councils in New Zealand.

“I genuinely believe we have one of the most talented councils in TRC history.”

She said while they would face challenges ahead, she was confident the Council would work together as a team and she would ensure every voice was valued.

She added she was looking forward to the fresh perspective of the four new councillors – Bonita Bigham, Donna Cram, Susan Hughes and Alan Jamieson – who joined the Council table for the first time today.

Mrs Littlewood is the Council’s fourth chairperson and first woman to hold the role. She takes over from David MacLeod, who stepped down from the Council at this year’s election after 22 years in the job.

A powhiri was held before the meeting to welcome councillors and iwi representatives, with the Council’s leadership team and guests in attendance.

The first ordinary meeting of the new Council is set down for 1pm on 8 November at Port Taranaki, at which the structure and chairs of Council committees will be confirmed.  The full meeting agenda will be available on the Council’s website three working days in advance.