Magic or science? Pukeiti offers both

The magic of Pukeiti has enchanted thousands of Taranaki people - but it's the science and deep knowledge behind the magic that captivated one recent visitor. 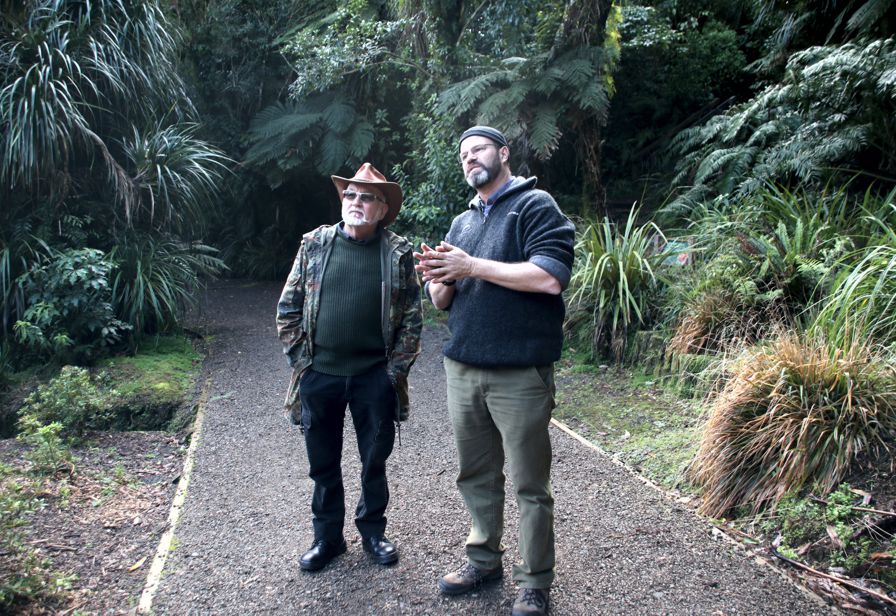 SIZING IT ALL UP: Plant breeder and Royal NZ Institute of Horticulture president Dr Keith Hammett, left, with Pukeiti’s Rhododendron Collection and Projects Officers, Andrew Brooker, at the gardens recently.

Botanist, leading plant breeder and Royal NZ Institute of Horticulture president Dr Keith Hammett likens a good garden to a symphony, and he found himself in tune with Pukeiti’s stewards on his first visit for 25 years.

“Taranaki should be proud,” he says, describing Pukeiti as a true botanic garden with much more value than the seasonal rhododendron displays that are known and loved throughout the region and beyond. As he inspected the garden with Pukeiti staff and Pukeiti Rhododendron Trust members, the experience and expertise behind the garden was evident. “These people are at the top of their game.”

Dr Hammett says Pukeiti stands above most display gardens because of its exhaustive plant cataloguing and publicly available database, and its research and conservation work.

“Conserving native flora is tremendously important and that’s happening here. But the conservation of precious exotic plants is equally vital in a global sense, and Pukeiti is playing its part here, too.”

Pukeiti plays a key role in New Zealand’s part of the global rhodo conservation effort, in conjunction with Massey University, to ensure particular species are conserved by distributing them among different botanical gardens around the country, according to where conditions suit them best.

Dr Hammett says this is the best approach to conserving a species. “You don’t save a species by growing just one example in one place.”

Pukeiti is also literally the front line in Restore Kaitake, part of the wider Towards Predator-Free Taranaki project. A virtual barrier of 1300 high-tech traps is strung across the width of the property so that it and the area below, all the way to the sea, can become a Zero Possum Zone.

Auckland-based Dr Hammett, whose PhD is in plant pathology, is regarded as New Zealand’s leading professional breeder of ornamental plants with a particular focus on dahlias, sweet pease and clivias. His dahlias are renowned for their bright, vibrant flowers, dark central discs and dark foliage. They have won international awards.

He spent four days visiting Taranaki gardens and nurseries last week in a visit organised by the Taranaki Rhododendron and Garden Group, whose members he also addressed.

Pukeiti is owned and managed by the Taranaki Regional Council on behalf of the people of the region. It is open daily and entry is free. For details of the garden, see www.pukeiti.nz.(external link) To see the Pukeiti plant database, go to pukeiti.gardenexplorer.org/(external link)