For long-time volunteers Tony and Anne Collins checking traps is a team effort.

For long-time volunteers Tony and Anne Collins checking traps is a team effort. 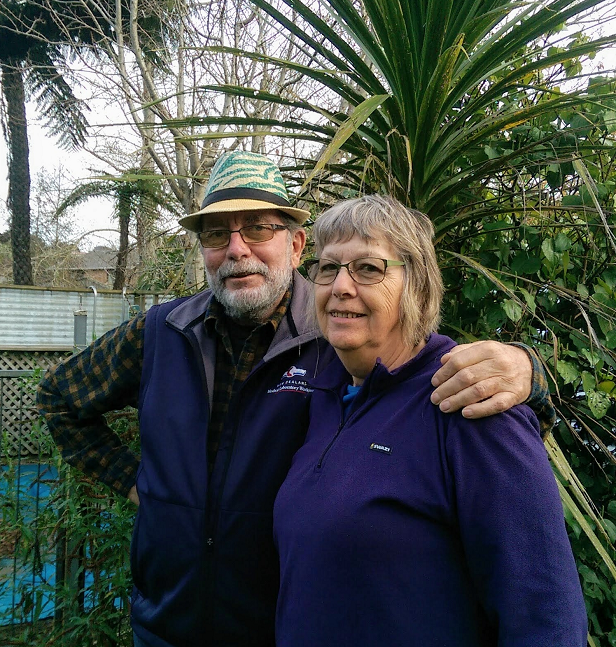 “We do it together. It’s part of us, it’s fun,” Tony says. Over the years they’ve developed a well-oiled system. He deals with the traps, while Anne logs the catches.

Tony may joke he does it because he’s “ordered to” but it’s clear this New Plymouth couple are both committed to doing their bit for the environment.

They’ve been involved with Forest & Bird North Taranaki (Tony is the current chair and Anne’s the secretary), Wild for Taranaki and are regular volunteers at Rotokare Scenic Reserve Trust.

In fact, that’s where it all began about seven or eight years ago.

“Anne came home and said she’d seen on the internet there were rats at Rotokare and all hands were needed. So she told me to take the motorhome and go down and help out.”

The now-retired plumber, who admits he’s “got to be doing things”, did what he was told. That’s where he met Chauncy Ardell from Towards Predator-Free Taranaki who helped Tony set up a trap run near the Collins’ Westown home.

Tony and Anne aim to check the 14 traps weekly, but it varies. Sometimes they will head out again after two days, other times they’ll leave it a fortnight – depending on catch rates.

They catch mainly rats and mice, with the occasional hedgehog. It’s something anyone could do, Tony says.

“You don’t need a degree… All you need is just to be a bit careful and it’s good fun,” he says. “You get invested and you take ownership of it.”

“The reward is more birds, more plants, more flowers. It’s a win-win,” Tony says, adding he and others have noticed a “massive increase” in birdlife in the area.

In between trips in their motorhome and their other conservation work, the couple plan on looking after their trap run for many years to come.

Or as Tony puts it: “Until I can’t get home afterwards and help myself to a G&T.”

If you’re interested in checking traps in a New Plymouth park or reserve, contact NPDC Parks Volunteer Officer Laura George on (06) 759 6060 to see where volunteers are needed. Note many smaller spaces only contain a few traps – so would not require a large time commitment.  Full training will be given.  If you are elsewhere in Taranaki and would like to help, please contact Towards Predator-Free Taranaki’s Chauncy Ardell on 0800 736 222 or pftaranaki@trc.govt.nz.