Yarrow Stadium is being redeveloped to ensure its stands meet earthquake standards and the venue remains fit for purpose in the post-Covid era and a valued community asset.

The venue’s East and West grandstands were declared earthquake-prone and closed in 2017 and 2018. The repair and refurbishment project was approved in 2019 after we sought feedback from the community. 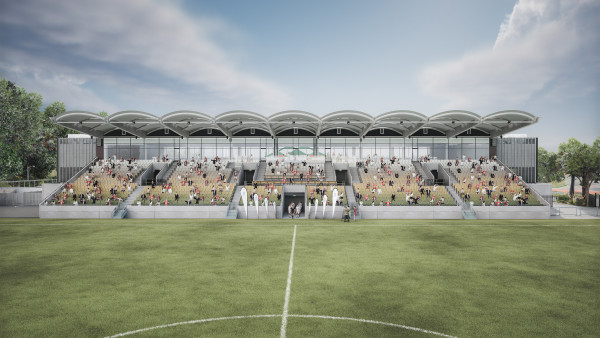 We’ve demolished the old TSB Stand and are building a brand new stand in its place. We had originally sought feedback from our community about repairing it but had to make the decision to demolish and rebuild because of issues like poor ground conditions, the integration of the old structure and insufficient foundation strength.

What this means for our community it has created the opportunity to design a facility suitable for a wider range of uses including conferences, trade shows and other non-sport events, both public and private. The new stand offers much more flexibility for sports users as well as it is ‘double sided’ so visitors will be able to use it to watch rugby, football and other sports on both the main pitch and the outer fields.

The new stand’s facilities - the public toilets, changing rooms, showers and food/beverage areas - will be available to users of the outer fields without the need to open up the entire stand or rest of the stadium. The rebuilt stand will also have flexible and scalable seating capacity so it can cater for events and fixtures at all levels.

The new East Stand will also see the needs of the venue’s sports users accommodated under one roof. So there is now no longer the need for a stand-alone training centre incorporating community facilities and amenities, as originally planned.

We’ve worked closely with Ngāti Te Whiti on the new design of the East Stand and users will see this through the many cultural design elements in the new facility. This work has reconfirmed the strong links the Stadium has with the hapū.

The old stand was demolished in November 2021 and work on the new stand will last for about two years with an expected opening in 2024.

The West Stand (also known as the Noel & Melva Yarrow Stand) is being repaired and refurbished. It requires major earthquake strengthening works, including improvements to ground stability, foundation tiebacks and new steel beams.

This has involved the removal of all bleachers and seating to gain access to the ground below, as well as structural components.

The work also includes future-proofing the stand by replacing the old roof.

Visitors will notice the new roof but most of the repairs will remain hidden under the now fit-for-purpose stand when it reopens. The earthquake-strengthening project has included driving massive stabilisation piles into the ground in front of the stand and adding new structural steel beams to the stand itself.

We will be using the old seats and bleachers as they remain in excellent shape and will look like new again once back in place and given a refresh.

Work started in December 2020 and is expected to be completed in 2022 and has been undertaken during difficult construction conditions caused by the Covid-19 pandemic.

The old lighting at the stadium was beyond the end of its life before the Yarrow Stadium project got underway so we’ve replaced it with new LED floodlights that are brighter and use less power.

The existing lights have been removed from the lighting towers and the new ones will be ready when the West Stand reopens in 2022. They will increase illuminance by 50% while reducing power consumption by 30%.

The main pitch is also getting a much-needed makeover and is being replaced with ‘GrassMaster’ hybrid turf – a blend of natural turf grown through and among artificial fibre that give the pitch a longer life with shorter recovery times that can triple the amount of weekly playing time compared with conventional turf.

The turf will be ready for kick-off when the stadium reopens in 2022.

Anticipation is building about the reopening as people in Taranaki feel a deep connection to Yarrow Stadium.

Thousands of us have enjoyed countless big moments there over the years at popular events ranging from community celebrations to international and national sports fixtures including All Blacks games and even stunt motorcycle exhibitions.

With te maunga as a backdrop, it’s also an important window on the region for the rest of Aotearoa/New Zealand and the wider world.

We'll be holding regular briefings for near neighbours of the stadium, who can also sign up for neighbourhood newsletters(external link) about the project.

We're also working liaising with our Stadium partner, the New Plymouth District Council, as well as Sport Taranaki, sporting codes and other Stadium users, and iwi.