The mauri and health of our rivers and streams are highly valued and are vital to the well-being, livelihood and lifestyle of everyone in the Taranaki region. 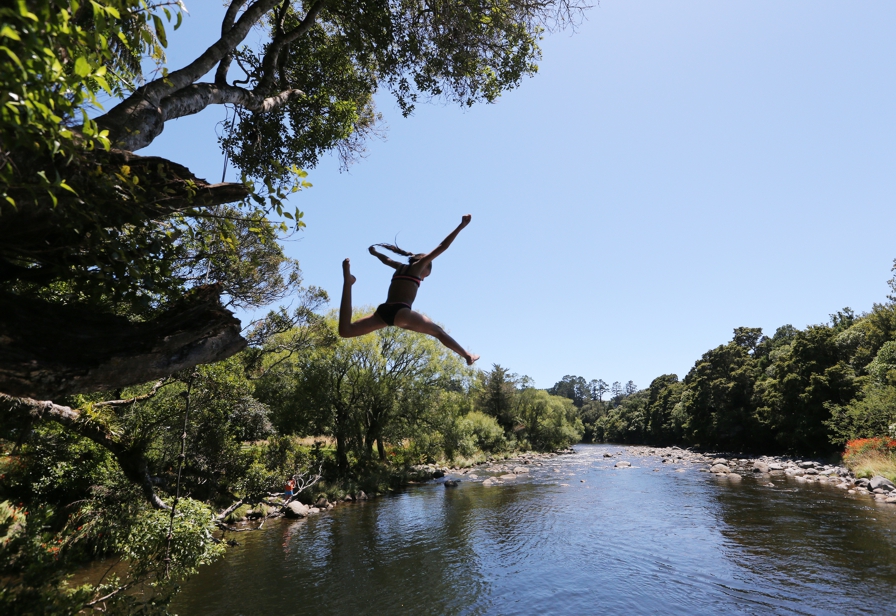 There is plenty of interest and public discussion around the water quality in our rivers and streams. And so, as the manager of the freshwater resource, the Taranaki Regional Council closely monitors waterway quality to ensure that the discussion, as well as the Council’s own decision making, is well informed by fact and science.

The Taranaki Regional Council has been closely monitoring water quality across Taranaki for more than two decades. The overall picture that has emerged in recent years is that Taranaki’s freshwater quality is generally very good by national and international standards and comparisons, and compares well with other catchments of a similar nature around New Zealand.

The latest trends for over 20 years of monitoring ecological health and the physical and chemical state of our rivers and streams show most measures are improving or not changing significantly, and in-stream life is again the best since our measurements began.

I invite you to read this report on the most recent findings of Council’s extensive water quality monitoring programmes. The programmes are designed to accepted protocols and subjected to external review and audit to ensure their scientific integrity. This report card is based on detailed scientific reports which you can access from this page.

Across the region, ecological health of waterways is improving or not showing any significant change, and in more and more rivers is the best ever recorded (since monitoring began in 1995). 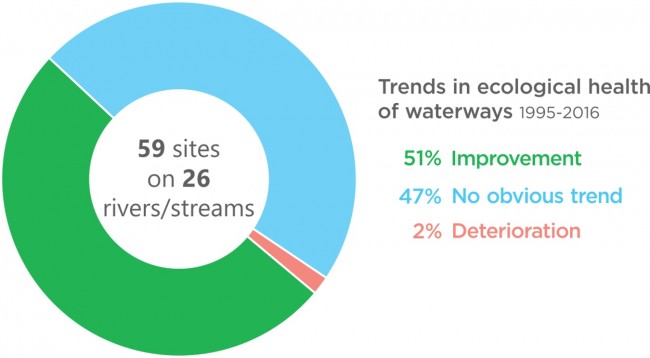 Measuring organic contamination, nutrient concentrations and aesthetic quality can flag pressures on waterways and indicate where to best focus our attention. The picture in Taranaki is larely stable but our aim to achieve more improvements and fewer declines. 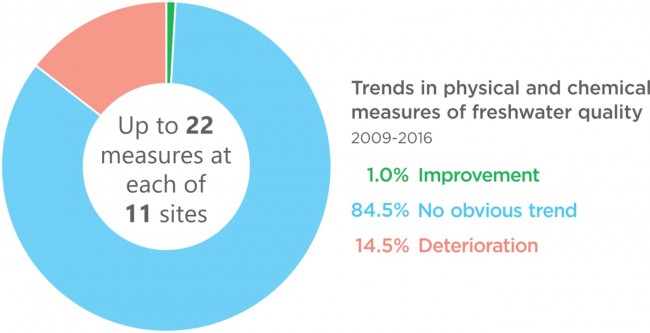 Algae, or periphyton, is essential for aquatic ecosystems but excessive levels can cause environmental and/or health problems. Just about all of Taranaki's monitored sites meet national guidelines. 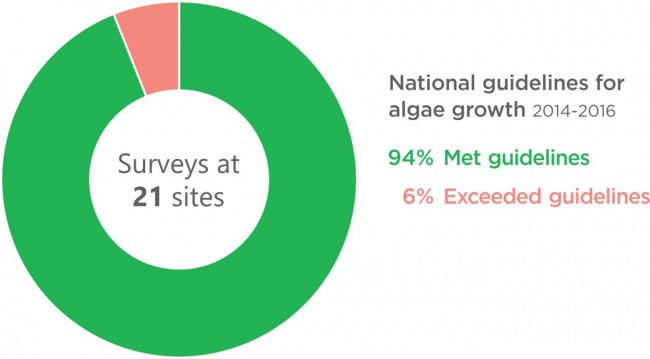 The Government has imposed compulsory measures and grades which apply to various uses of water, through the National Policy Statement (NPS) for Fresh Water Management. Grades ‘A’, ‘B’ and ‘C’ indicate quality from best to acceptable; ‘D’ is unacceptable and improvement in water quality is required.

Comparison of the region’s water quality data with the national standards across the 11 separate monitoring sites, shows that for 55 measures: 38 (69%) are in the ‘A’ category, 15 (27%) are ‘B’, and there is one ‘C’ category rating. Only one is below the national bottom line for acceptable water quality (‘D’). By these standards, water quality in the region is ‘fit for purpose’ by almost all measures within the compulsory national criteria at almost all sites most of the time, and is usually in the highest category.

In Taranaki most people swim at the beach rather than in rivers. The Council monitors the quality of seawater at popular coastal beaches every summer. Results are consistently better than the national average. In 2016/17, 99% of samples were within MfE guidelines. Opunake beach had the best quality. Bell Block beach showed the highest level of bacteria, but the median and maximum at Bell Block were still well within the guidelines.

Water quality at popular river bathing spots is far better than in the 1960s and 1970s, when waterways were routinely contaminated with partially treated municipal sewage and/or raw, untreated dairy effluent. Today, wildfowl and gulls are the major source of contamination at the few freshwater sites that routinely exceed health risk guidelines.

People expect to be able to swim safely in our lakes, rivers and coast and the Taranaki Regional Council monitors popular swimming spots each summer. Monitoring shows that overall the health risk from swimming in most places, most of the time, is very low and well within national guidelines.

All natural water bodies contain bugs (pathogens) that can make us sick. And the more bugs, the greater the likely health risk. There is no particular level of pathogens where a ‘swimmable’ river becomes ‘unswimmable’, or ‘safe’ becomes ‘unsafe’. The health risk is a sliding scale. Water bodies in any setting anywhere will also get occasional spikes.

Regional and district councils use national (Health and Environment Ministries) guidelines to inform the public of the health risk to swimmers. The guidelines are highly precautionary and based on the health risks for the most vulnerable in the community. Some rivers described as ‘unacceptable for bathing’ in NZ would be considered ‘good – acceptable for bathing’ under European standards.

It is not possible to maintain micro-organisms at very low levels all of the time in all water bodies, but the investment by local communities in upgraded sewage collection and treatment systems, and by farmers fencing and planting streambanks to control stock access and reduce pasture runoff go a long way to improving water quality in Taranaki.

During heavy rain and high flows many rivers can be dangerous and may contain debris, sediment and pathogens in runoff from homes, streets and farms or overflows from town and residential sewerage systems. To decide where and when it’s safe to swim, you should check the Taranaki Regional Council website, district council websites or the Land Air Water Aotearoa (LAWA) website and use common sense based on what you can see from the riverbank. As a precautionary approach, people should generally avoid swimming in rivers and lakes for three days after heavy rainfall. 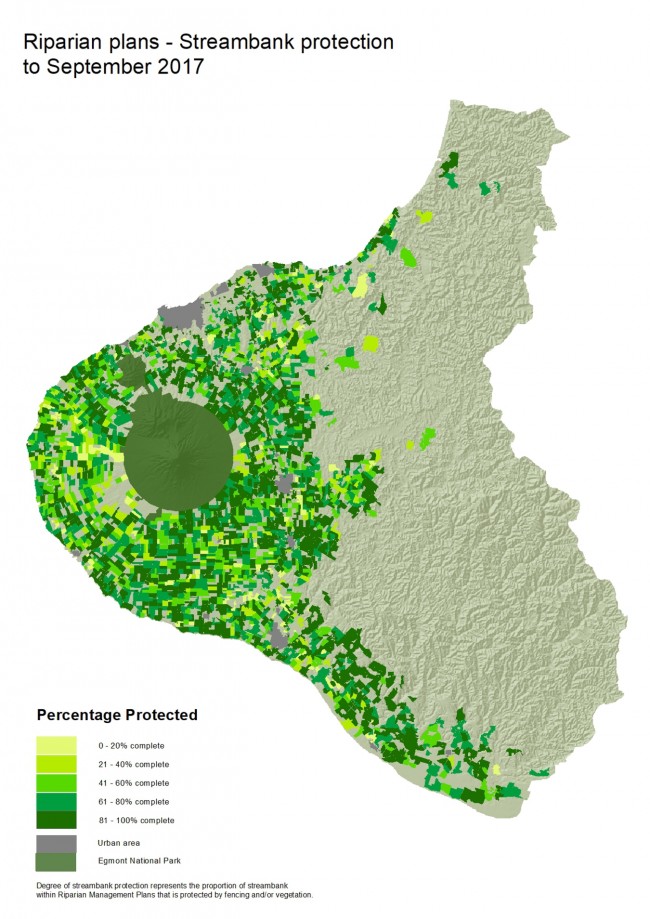 The Waiokura is part of a national project which showcased five ‘best practice dairy catchments’ from around the country – two in the North Island and three in the South Island. The project started in the mid 1990s and is conducted by researchers from NIWA, AgResearch, DairyNZ and the Regional Councils.

The latest findings, published in the Journal of Marine and Freshwater Research, showed:

The Taranaki Regional Council is continually adapting and refining its approach to freshwater management to ensure further protection and enhancement of Taranaki’s waterways.

Good progress is being made through the Council’s current programmes, policies, strategies and rules to achieve these objectives — regional initiatives such as the switch to land-based treatment and disposal of dairy effluent, and completion of Taranaki’s Riparian Management Programme. A new Regional Freshwater and Land Management Plan for Taranaki, however, is a number of years away, as the Council awaits finalised Government decisions and initiatives.

The scientific moniitoring results referred to in this report are available on this website or by contacting the Council - see the Related Links and Contact Us sections on this page. An overview of this report and those from earlier years are also downloadable in PDF format.