The Waitara River is set to gain extra benefits from a national pilot study focused on the best ways to assess any microbiological health risks to freshwater swimmers. 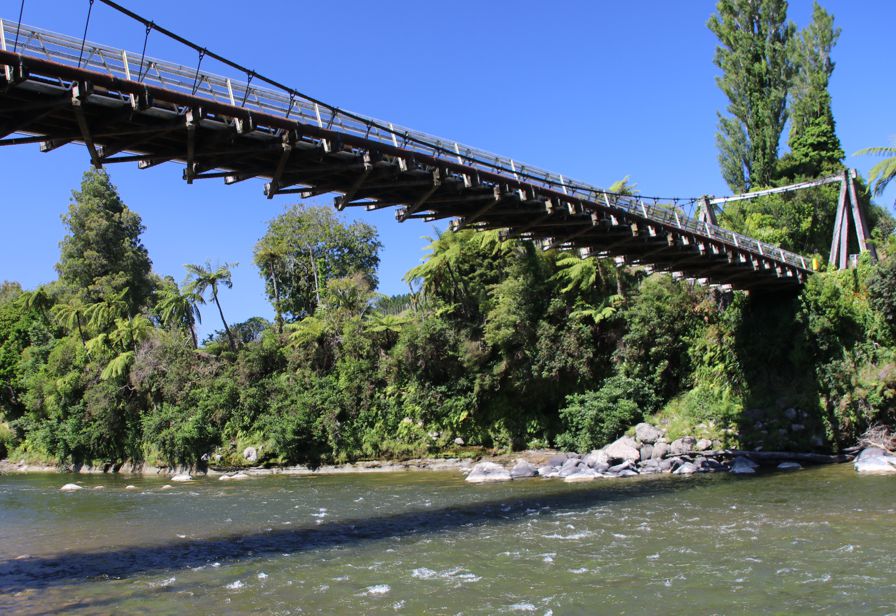 The national study will include analyses of up to 80 samples taken from the Waitara River at Bertrand Rd, where an iconic suspension bridge spans the waterway.

The ESR-led study will include detailed analyses of up to 80 samples from the river at Bertrand Rd, one of only 16 sites to be sampled nationally over the coming few months.

The river’s inclusion is hailed as great news for its mana whenua and the Taranaki Regional Council, who have begun working together to make the best use of newly available funds specifically earmarked for improving the river and its catchment.

The Council’s Director-Environment Quality, Gary Bedford, says both Te Atiawa and the Council will have qualified people collaborating with ESR in the pilot.

“The timing for such an intensive study is perfect, with management of the Waitara River entering such an exciting new phase,” he says, “We’d suggested this site to the study’s organisers and we’re delighted it’s been selected.”

The main aim of the pilot study is to find the best test methods for measuring the risk to human health from bacteria in fresh water. At present, E. coli levels are measured against guidelines developed from test methods and a study dating back 20 years.

E. coli itself is not necessarily a problem but its presence indicates that there may also be other, more dangerous, pathogens for which analyses are expensive and time-consuming. ESR and the study’s funder, the Ministry for the Environment, want to reduce the uncertainties and the pilot study is to test methods in preparation for a comprehensive, three-year nationwide study beginning as soon as next summer.

Mr Bedford says the valuable information yielded by sampling at Bertrand Rd will expand current knowledge about the river and feed into proposals to be considered by the Waitara River Committee, being established as part of requirements of the Waitara Lands Act of 2018. The Committee will be made up of five TRC appointees, along with four appointed by iwi authorities with mana whenua over all or part of the river, and one appointed by Te Kōwhatu Tū Moana, a trust established by the Manukorihi and Otaraua hapū.

This Committee will decide how to best use funds directed to the Council from Waitara leasehold payments and the sale of leasehold land. The Act requires the funds to be largely spent on the protection and enhancement of the river and its catchment.

Sampling at Bertrand Rd is expected to begin in the first two weeks of February.