Taranaki Regional Council and Dialog Fitzroy have joined forces to launch a bus service for workers travelling between some of the region’s biggest industrial sites. 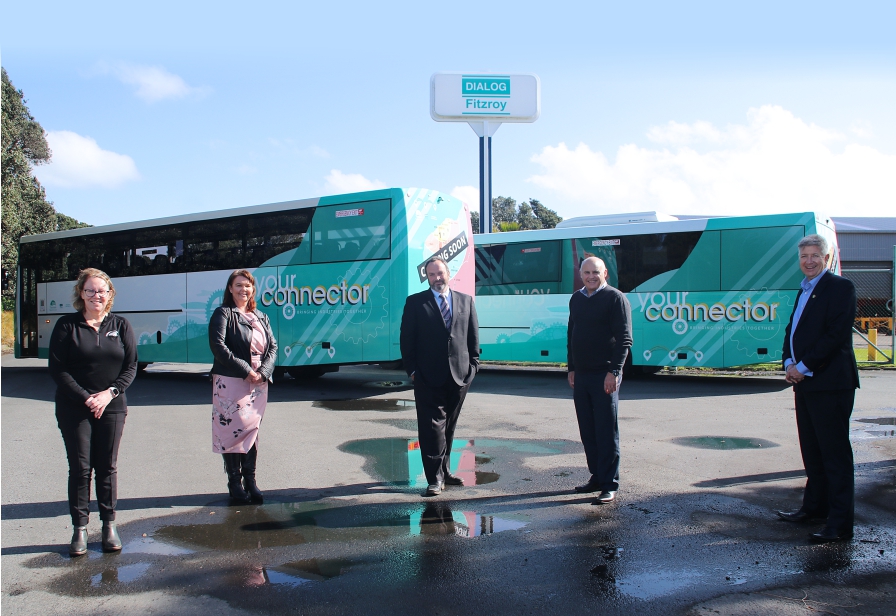 From Monday two new Your Connector coaches will transport Dialog Fitzroy(external link) and other industry staff from Bell Block to Kapuni or Fonterra’s Whareroa site each weekday morning, stopping in New Plymouth and other towns along the way. They will return again in the late afternoon.

Dialog Fitzroy is financially supporting the service, so there will be no additional cost to ratepayers during the 12-month trial period.

“We’re delighted to be working with Dialog Fitzroy to deliver a safer and more environmentally-friendly way to get Taranaki industry workers where they need to go.

“The low-emission coaches are spacious and air-conditioned with seat belts and free Wi-Fi so workers will be able to sit back and relax on their way to and from work.”

Other companies with workers travelling to the sites are also planning to use the buses. The plan is to open it up to the general public in the coming months, subject to availability.

The Council’s Transport Engagement Manager Sarah Hiestand says the Connector service provided by Pickering Motors is a popular transport option between South Taranaki and New Plymouth. These extra routes are an extension of that.

“Our community told us they want better and more environmentally-friendly public transport options across Taranaki. This collaboration is a step in that direction,” she says.

The Your Connector trial will be reviewed in 12 months with the potential for expansion if it goes well.

Dialog Fitzroy General Manager of Contracts Shane Coleman says the company invested in a Normanby base several years ago and has worked hard to build a local workforce. However due to high demand on average 100 workers each day commute from North Taranaki.

Providing the buses will take 75% of its vehicles off a busy stretch of State Highway 3, which he says has become more hazardous.

“It is one of the highest safety risks for our people and business. We believe the bus service will improve journey safety, remove driver fatigue and reduce the risk of incidents. The environmental benefits will also be significant.”

Mr Coleman says Dialog is pleased to be supporting its community with this public transport extension.