Latest monitoring results show Taranaki is maintaining the significant improvements in freshwater ecological health that it has won in recent years. 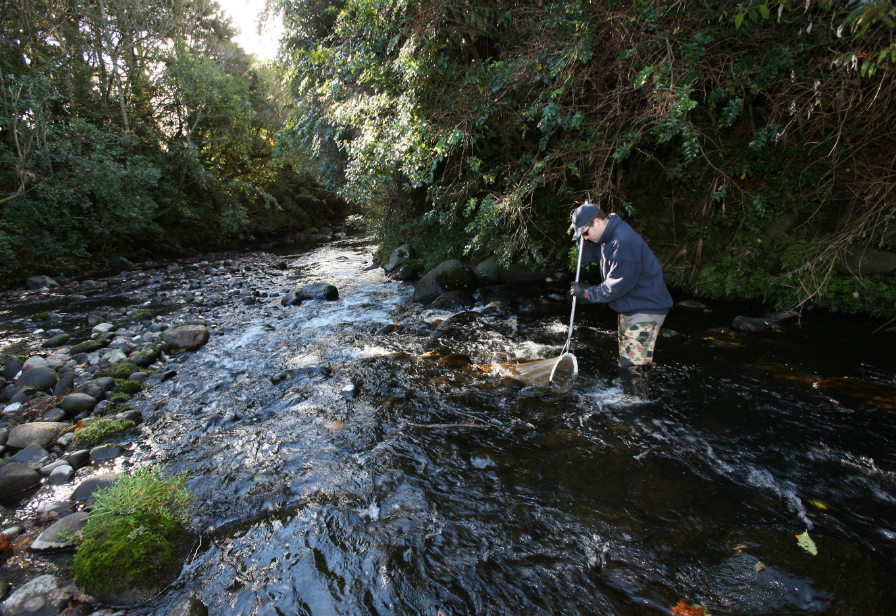 TRC Officer collecting macroinvertebrates as part of the Monitoring Programme.

The region’s rivers and streams remain in the best state they’ve been since the mid-1990s, analysis of Taranaki Regional Council sampling at 59 sites in the 2017-18 year shows.

Ecological health is regarded as the prime measure of freshwater quality and is assessed by examining what sort of tiny creatures are living in waterways, using a nationally recognised scoring system known as the MCI (for macroinvertebrate community index).

“It’s most encouraging that we’re still seeing improving trends at as many or nearly as many sites as in recent years when the relative numbers have been the best ever,” says the Council’s Director-Environment Quality, Gary Bedford. “We would expect to see a decrease as rates of improvement begin to flatten out and the length of the record increases.

It’s also pleasing that improvements are occurring across the full length of catchments, he says.  “This is yet more evidence of the effectiveness of the massive community effort that’s gone into fencing and planting riparian (streamside) margins. It’s a testament to the foresight, commitment and energy of the people of Taranaki.”

The Council’s Riparian Management Programme was launched in the 1990s and has seen the region’s farming community voluntarily fencing the ring plain’s waterways and protecting them with vegetation. So far that’s involved 5.6 million plants (supplied at cost by the Council), thousands of kilometres of fencing and tens of millions of dollars in investment. The finish line is now in sight.

“We can expect to see further gains as riparian fencing and planting reaches completion, and as more dairy farms switched to land-based effluent disposal, as required by the Council,” says Mr Bedford.